At the turn of the millennium, many social commentators were concerned about the lack of political interest shown by the public in the world around us. There was a sense that the world’s problems were far away, and that there was little that one person alone could do to make a change. Fast forward 20 years and the social activism landscape is very different. Social media has allowed us to vent our anger and frustration and highlight the issues that anger us, as well as to share ideas and initiatives like never before.


We are bombarded by information that could be classified as ‘doom and gloom’ stories. We can tap into the global news agenda at any point of the day, so it can feel that the issues of the day – economically, environmentally, socially – sit intimately at our finger tips. It can often feel difficult to hide from the conversations and challenges that surround Brexit, the fires and floods from global warming, rising poverty, the impact of technological advance and indeed, whatever Donald Trump has just tweeted.

But despair and anger are key to spark into action. In 2020, we believe that in the face of the chaos, inertia, red tape and irresponsibility, increasing numbers of informed individuals and groups aren’t just criticising and waiting for legislation that never comes, but are building alternative solutions to address the inequality balance.

When we feel that we are at a tipping point it can often compel us to march, volunteer or simply take matters into our own hands on the ground in our local communities. It seems that by getting stuck in, we can offer immediate solutions rather than wait for the powers that be, to solve issues for us.

There are so many examples today of normal people turning ideas into concrete action, from Greta Thunberg’s school boycotts, to ‘The Incredible Edibles’ in Yorkshire, driven by the attitude that it’s easier to ask forgiveness than permission as they turn disused verges in the former mill town of Todmorden into free food plots. Gig economy workers are unionising in order to demand their rights to fair pay and contracts.

Starcom has been closely monitoring the trend of social activism. As Twitter is the key forum where people turn to voice, share and promote the issues and initiatives that they care about, we decided to collaborate in an agency and platform research study to identify how people feel about the world today, what social actions they carry our and why, and – crucially for us – understand how brands should behave around these passionate issues.

Our approach consisted of a mixed quant and qual methodology. We conducted surveys and forum discussions with Twitter’s ‘Insiders’ community made up of 5,000-plus individuals and we used image association techniques and cognitive speed techniques to find out people’s instinctive reactions and feelings towards activism, both personal and brand campaigns.

Our immediate findings confirmed our hypothesis that while many of us might feel optimistic about our own personal lives, there is a deep-rooted negativity about the direction of the world’s progress. We found that only one in 10 are positive about the world in general, and three in 10 are pretty angry.

The top concerns were as follows: 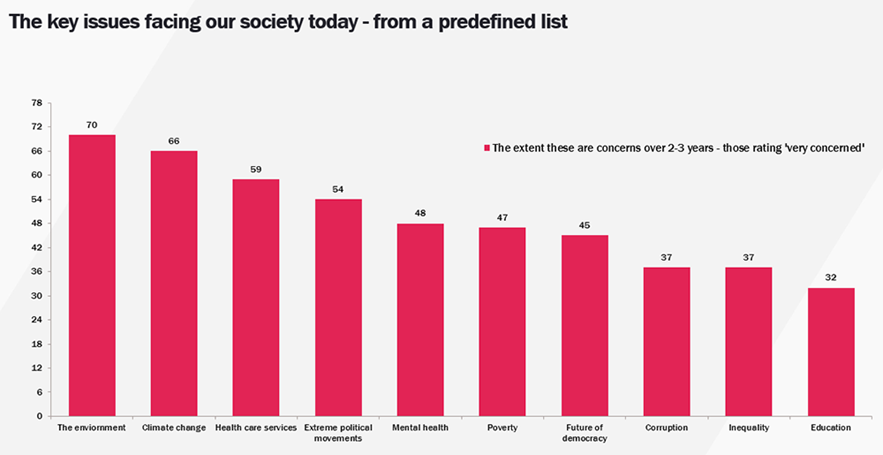 We found that people weren’t just anxious about these issues, they were frustrated too. We asked people to consider how much they believe that the government cared about the same set of issues. And, in almost all areas, the government was seen as being woefully inadequate.

People are also aware that today’s global challenges are intrinsically linked. One of our respondents from the Insider’s forum highlighted the connection between political instability and our planet fragility.

“Climate change is likely to increase instability in the world, leading to greater inequality and resource conflicts. At the same time, the co-ordinated global action necessary to limit the damage is not possible in the current political climate” Male, 35–44

Our data also confirmed that people are taking matters into their own hands. This was not a surprise when we consider the number of demonstrations making headlines – Extinction Rebellion, Black Lives Matter, on Brexit, on Grenfell Tower, and the #MeToo movement.

Our data suggested that 87% had participated in some way in societal issues (e.g. by discussing thoughts and concerns, making donations to causes, changing their own behaviour etc.). Of those that have participated, 63% feel more knowledgeable and passionate about these issues compared to a couple of years ago, and 47% are more actively involved.

What consumers expect from brands

Of course, the drivers and motivations for engaging in social activism can differ enormously. If brands want to connect with people and demonstrate an understanding of how they feel, then a nuanced understanding around particular issues is vital.

In order to measure these motivations, we used Starcom’s ‘Human Desires’ framework to understand what emotions were driving people to make a stand and get involved.

We found that, when considering all kinds of activism, over half (56%) do so because they want to challenge the status quo. A similar percentage felt that demonstrating, debating and doing something allowed them to feel a sense of purpose. Discovery (44%), status (43%) and inspiration (40%) all followed as important factors.

We also found that the emotions that drive personal activism and action varied hugely from the expectations of any brand involvement, and we would argue that brands which do not understand this difference open themselves up to criticism from consumers.

In 2017, Pepsi’s infamous ‘Black Lives Matter’-style campaign tried to piggy-back on the passion of its key audience to take advantage of the distress, inequality and passion that drove campaigners to put themselves on the front line in street demonstrations. LUSH hit the wrong note in 2018 through a campaign around past abuses of power by the police.

Personal activism is deeply rooted in strong emotions, both positive and negative. People may feel wronged and compelled to speak out to demand justice. Others are excited to support new solutions – take the innovation to the plastic pollution problem in the UK.

In contrast, brand activism is less emotionally-charged, perceived instead to be far more philanthropic, offering smart solution in certain, appropriate to the brand domains. In terms of issues, we found that brand activism is prominently associated with the environment or poverty alleviation.

And big brands should take note that when we asked our respondents to spontaneously name brands that engage in activism, over 70% of people immediately think of not-for-profit organisations such as Greenpeace and WWF, not consumer brands.

This suggests that whilst consumers generally demand that brands take responsibility, it is rare for a brand to truly win in the social activism space. We explicitly asked respondents to select the brands they think make a difference in society, from a predefined list. These are the brands that are seen to be doing well:

Many of the brands people feel are doing their bit are those they frequently come into contact with. These are the brands we often trust the most. In having weekly, if not daily, contact with them, we are probably more aware of the brand's efforts to give back to communities and the environment, through either store marketing or their advertising. It is therefore not surprising to see so many supermarket brands being cited as doing well (Asda, Iceland, Sainsbury’s, Tesco and Waitrose).

Perhaps more importantly, when we adopted a timed cognitive measurement approach to assess the qualities associated with activist brands, we found that those associated with social activism are more likely to be trusted, spoken well of, and seen as authentic. 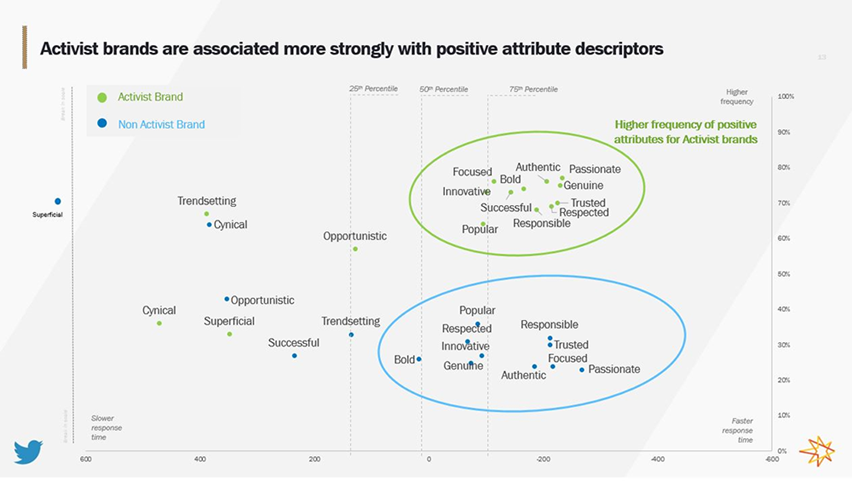 This is in contrast to brands that aren’t involved in any kind of social activism, which are seen to be cynical and superficial, though this is a more explicit, deliberate perception.

With so many briefs asking agencies and platforms to help increase trust markers for brands, and to build stronger consumer engagement, marketers should be thinking about how we can help support our brands to become more socially active.

As the world becomes more turbulent — both in reality and our perception of it — it is clear that supporting the communities and the environments that brands exist in is only going to increase in importance.

Brands need to stay ahead by using tools such as social listening to understand specific concerns as well as general sentiment, to decide how and when their brand can contribute in an authentic way.

When they do feel they can appropriately and relevantly support specific causes they should consider how they can engage their audience via media, both traditional but also new media such as AR and owned content to allow customers to dig deeper behind the ad, amplify their efforts and gain support. Influencers, for example, are crucial to watch, both positively and negatively. As the backlash against paid influencers rises, genuine leaders and endorsement gain importance.

In summary, our study into social activism found the following: