Most people think of the Olympics when you say London 2012, but that was also the time of one of the single biggest campaigns of my career. That autumn, Orange and T-Mobile took their two networks, merged them, and created the first 4G network in the UK – EE.

As a completely new brand they had to land with a BANG. It was vital that everyone knew that a serious new player had arrived. EE had a small window of 4G exclusivity, and they had to become the market leader in just a few months.


EE didn’t mess about. They became the UK’s biggest advertiser that quarter with nearly £50million in ad spend. It was a huge multimedia campaign, but to really make sure that they were truly unmissable, EE turned to outdoor advertising.

Spontaneous awareness was the vital metric in this sector. We knew that in mobile telecoms, the brand you were most likely to consider was the one you thought of first. With that in mind, we made sure that wherever you looked you’d see EE, and we bought one of the most dominant OOH campaigns I have seen in my career.

The highly distinctive colour palette and the simple message – #4GEE – took over the city. In London, it felt like every premium ad site had been taken, you could barely go down a street without seeing it. It was plastered on every other bus, all over the Underground, the iconic Waterloo IMAX was wrapped, they even connected up liveried London taxis with their network… They lived up to their “Everything Everywhere” name. 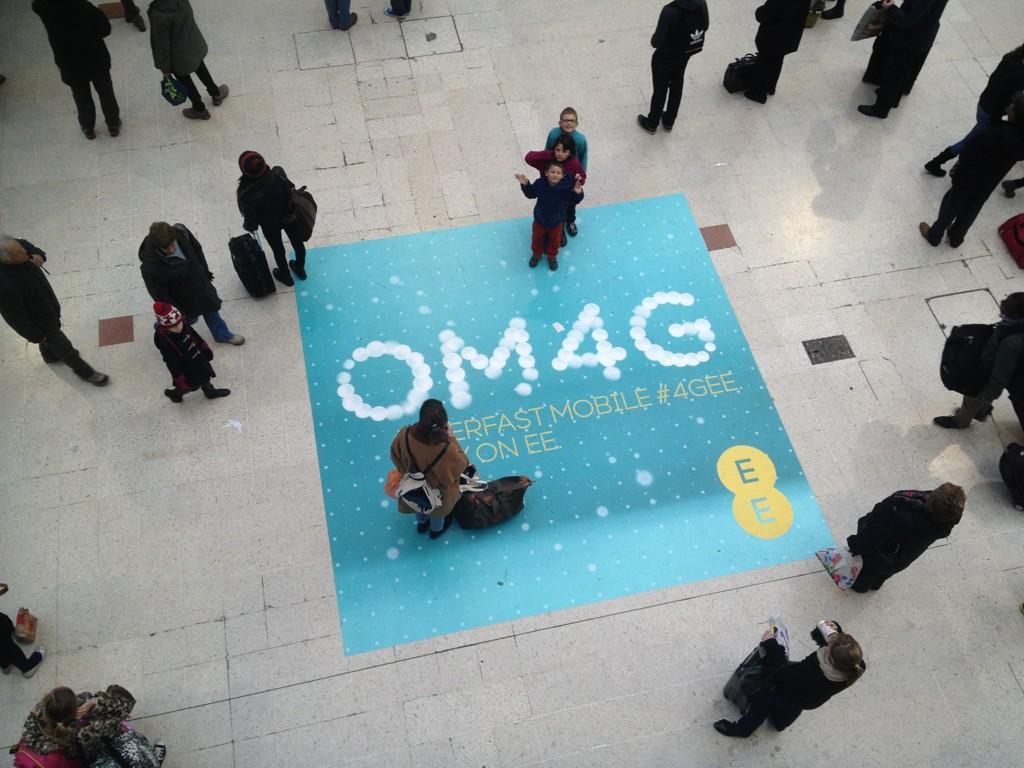 They rapidly went from zero to nearly 40% spontaneous awareness and ensured that they could quickly compete with the big players of O2 and Vodafone. That was how you launched in style in 2012. 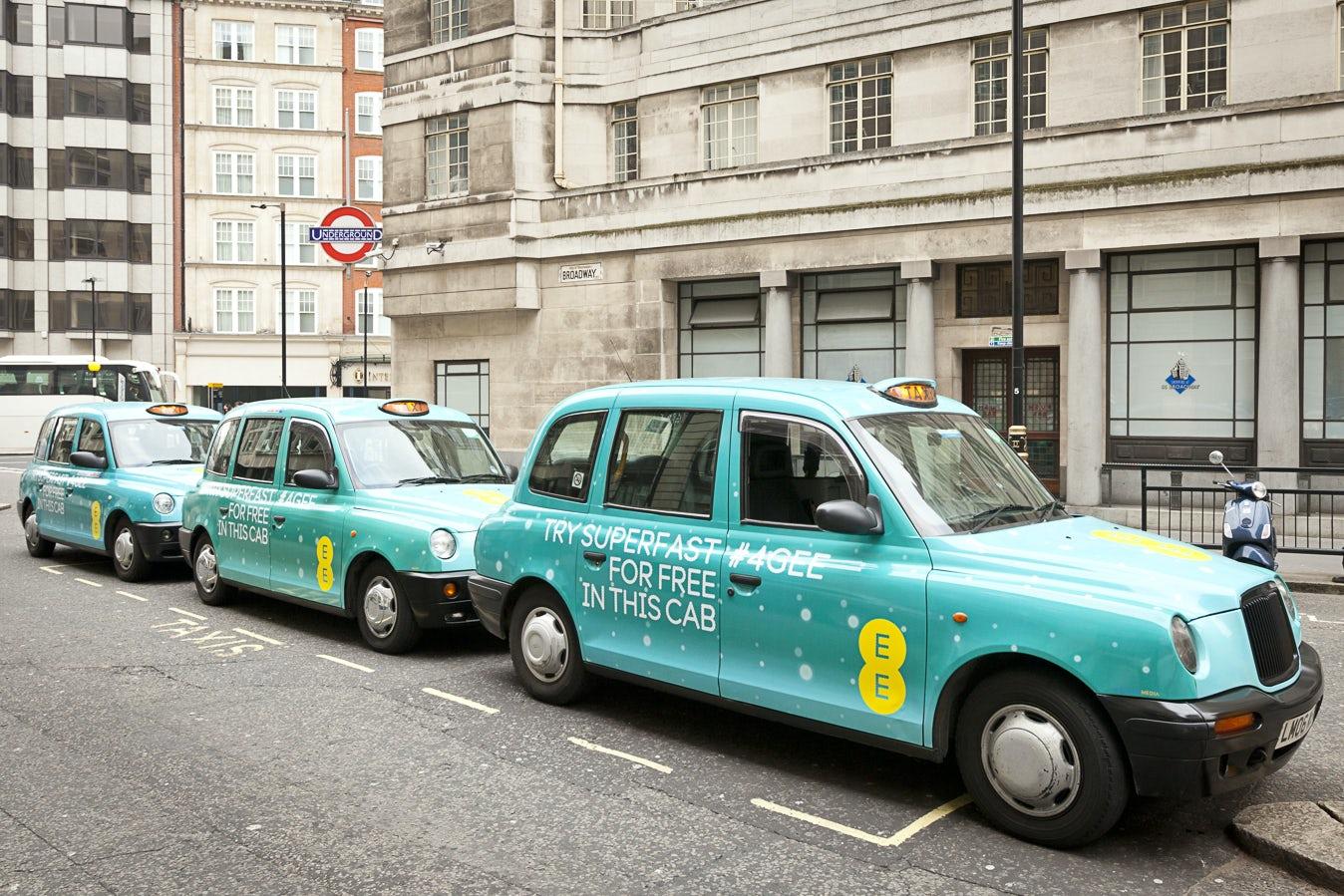 Fast forward to 2020 and we might have to accept that we may never run a campaign like that again. Campaigns like that work best in large cities. Large cities in the UK have substantial transport networks, thus commuter audiences, all of which have generated revenue for a thriving, innovative and premium outdoor advertising industry.

But what happens to that medium when the audience simply isn’t there anymore?

Many city centres are dominated by office workers, many of whom are now working from home. And let’s be honest, if they are managing to function well in their jobs now, then the likelihood of them being back in the office full time when all this is over is slim. Central London today is a ghost town, and whilst I sincerely hope that changes, we have to accept the fact that some things might never go back to quite the way they were.

It is hard to foresee a world where commuter trips reach even 50% of pre-lockdown levels. That’s half as many impacts. Where a transport media campaign in a big city might have reached 80% of people, around 10-15 times each in a two-week burst, that might be more like 50% 5-times each.

So now, it doesn’t matter how much you spend, you don’t have that option of a focused, intense, rush of awareness that only a truly heavy OOH campaign can bring.

And it isn’t just about reach and frequency. Dominating London was also a huge signal of intent. The scale and quality of that campaign told people “we are a serious player, we’re here to stay”, delivering an implicit reliability message. But now, if fewer people are seeing those high impact billboards, then it doesn’t give as much of a signal at all.

How can we do real brand building activity in online media?

For too long online advertising has been dominated by data-driven efficiency maximising sales activations at the end of the purchase journey (– which it can be brilliant at).

But when a person’s mobile phone and laptop are the only opportunities we might have to talk to a valuable audience through the working week, we need to make them work harder than standard display ads can do. We need to be able to deliver those unmissable signals of a brand that can’t be ignored. Our brands need to be able to stand up and be noticed and set apart from the crowd, not just one of a million programmatic ads.

Bluntly, online advertising could do worse than learn from the decades of brand building innovation that we have seen in the outdoor advertising industry.

I was recently sent an example of a campaign that took a brilliant OOH idea and applied it to digital. This time not a brand, but the Toronto Fire Department. They used this truly innovative OOH special build to highlight the speed that fire spreads at. 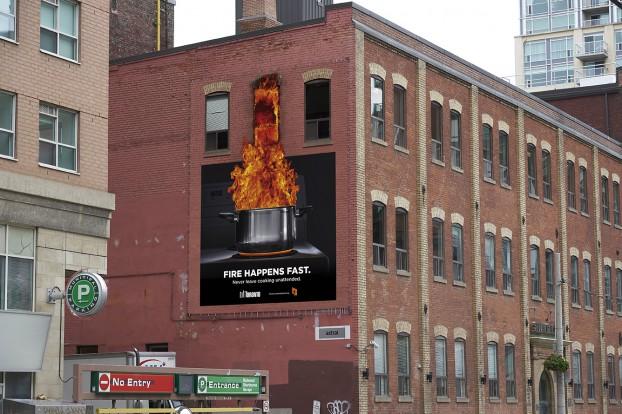 But then they continued this powerful creative idea in digital ad format, where one burning ad unit sets fires to the next as you read the article, making it truly unavoidable as your web page goes up in flames.

Bob Hoffman, the Ad Contrarian, likes to state that he can “think of no examples of major brands of beer, soda, cars, toothpaste, paper towels, candy bars, soap, fast food, peanut butter — you get the picture — that were built by online advertising.” Whether or not this is true, now is the time to prove him wrong.

As a final thought, my preferred scenario is one where OOH recovers from this setback, but we have learned how to use digital in addition to build truly holistic brand campaigns hand in hand with those magnificent poster campaigns.